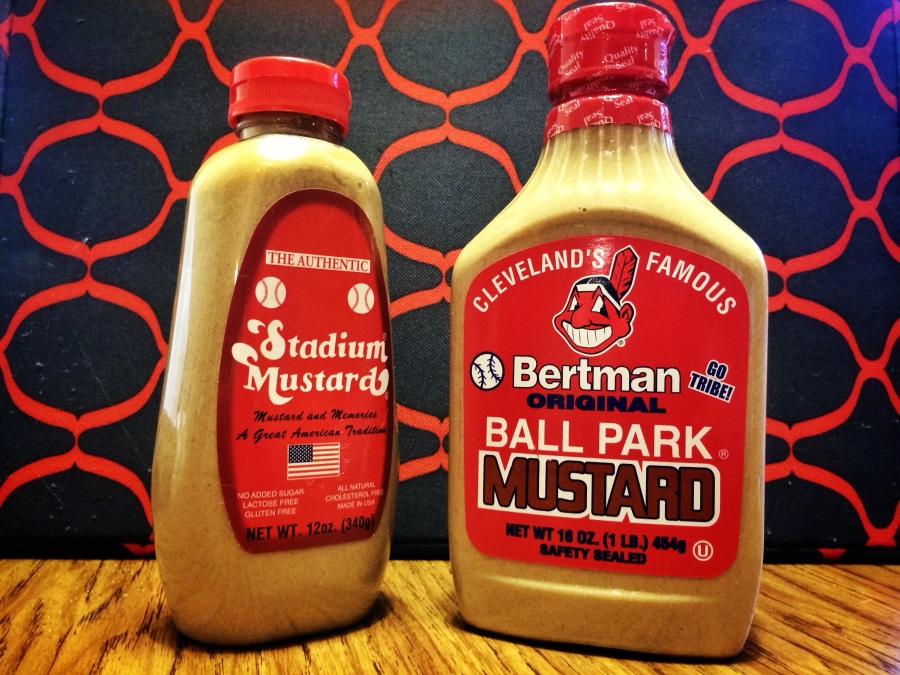 Cleveland, Ohio is home to two outstanding spicy brown mustards -- and one of the most bitter rivalries of all time.

The North versus the South. The Hatfields versus the McCoys. Our great nation has played host to many historic rivalries, but none so bitter — so brown, so tangy — as the Cleveland Mustard Rivalry.

On your left: the Authentic Stadium Mustard, which is served in an astonishing 150 baseball stadiums, including FirstEnergy Stadium (formerly home to the Cleveland Browns).

To the right: Bertman Original Ballpark Mustard, currently sold at Cleveland’s Progressive Field. (The bottle doesn’t always have that un-progressive mascot on it, but the special-edition bottles I received in the mail unfortunately do.)

Both condiments claim to be Cleveland’s original mustard. But which came first? And, because both mustards are widely praised by foodies as the greatest mustard on Earth: Which mustard is better?

Both mustards — each, you’ll agree, a far cry from the crude yellow ooze liberally squirted at many a casual cookout on a late summer’s afternoon — boast spice, heat, and zip. Both are inspired by European mustard, which was especially popular with German and Eastern European immigrants in Ohio at the turn of the 20th century. (Don’t you dare call these mustards Dijon!)

As such, both historic mustards are American as apple pie — after all, both are synonymous with baseball, that most American sport — and each mustard serves as an important cultural document.

With the help of an unbiased assistant, I performed a blind taste test. (I myself was not unbiased, however: I’d had Stadium Mustard before, and I was acutely aware that sheer familiarity might predispose me to an inadvertent preference.)

I began by examining two dollops of mustard. By all appearances, they were identical. Both mustards, I’ve read in what little literature is available, pride themselves on having a homogenized, ungrainy, consistently-brown look to them. I admit, I could see no superficial difference between the two.

It was time to cut the mustard, so to speak. I stuck a clean finger into the first dollop and tried it.

“I think I know which this is,” I immediately blurted. Then I paused, suddenly tentative. I gingerly dipped another clean finger into the opposition.

“Okay,” I said to my assistant, now confident, “this one is Bertman’s. And this one is Stadium.”

“You’re right!” my unbiased assistant announced. I scribbled some notes.

The real “tell” is the mustards’ consistency. You see, the Authentic Stadium Mustard has this incredibly creamy texture — which, in fact, I’ve always found offputting. Spread thin on a sandwich (which is how I first tried Stadium Mustard, at one of San Francisco’s best sandwich restaurants, Deli Board), it’s fine, delicious even. But when it’s laid on too thick, the texture isn’t quite right. It’s just too thick, too creamy.

Bertman Ballpark, however, wasn’t as creamy. “Gritty,” my assistant suggested.

“I’m not sure yet,” I said, and I tried the mustard again. Perhaps it was a bit grainier; I wasn’t sure, though. “Is it thinner?” I wondered aloud. (To show you how subjective things are, one reviewer describes Stadium Mustard as the grainier, thinner mustard, ultimately naming Bertman’s as the creamier.)

Bertman, I finally decided, had a start, a middle, and a finish, like a song. There was a lingering tanginess afterward. I idly wondered if the difference were vinegar.

I struggled to compose an opinion for my notes. It was as if Stadium Mustard struck all the same notes, but as a chord — as if all the flavor notes were played simultaneously, rather than one-at-a-time.

A brief history of Cleveland mustard

From the 1920s until 1982, Joe Bertman’s mustard was the mustard at both League Park and Cleveland Municipal — or so Bertman’s family claims. (According to a 1989 newspaper article, Bertman’s “original” mustard didn’t actually hit ballparks until 1950.) Bertman himself was born in Poland in 1902; moved to the US at age 6; began his own pickle business by age 19. Mustard quickly followed.

Still, Authentic Stadium Mustard didn’t brand itself as such until 1969 — at which point, Bertman already had a 19-year jump on the company.

Which is the “original” stadium mustard? And which, of the two, is the most “authentic”? It’s hard to say. Bertman apparently discovered his secret formula in 1921, a full 31 years after Stadium Mustard insists its mustard first went into production. (Some biographers have suggested that Joe Bertman simply imported good food; perhaps Bertman was not so much an artist as he was an all-American entrepreneur.)

Speculation is rampant, but here is the fact: Regardless of who actually invented the mustard, Joe Bertman indeed brought the mustard to Cleveland, and he is therefore responsible for the mustard becoming the iconic mainstay it is today.

My assistant and I next tested the mustard as God intended: on hot dogs.

These trial hot dogs were totally undressed, except for a single squiggly line of mustard down the center of each.

I voraciously consumed the first hot dog by accident, forgetting to “listen” to the mustard. So I tried another.

My palate could still hear the difference between the two mustards, but this time the Stadium Mustard was singing a different tune: Atop a warm American sausage, the creaminess of Stadium Mustard was no longer a liability. Instead, the mustard played against the meat in a really lovely way. Stadium Mustard’s comparative lack of complexity turned the hot dog into an easygoing, straightforward, tasty experience.

“What’s the difference?” I exclaimed, now truly worried for myself.

I grabbed each bottle and skimmed the ingredients. They were identical, except that Bertman’s vinegar is specified as distilled. Meanwhile, Stadium Mustard’s label includes red pepper among its few other ingredients.

Otherwise, both recipes are identical: Both use something called “Mustard #1,” as well as that most unique of spices, “Spices.”

Then I saw it.

The sugar content (which, I assume, is why I prefer Bertman’s) is sort of a major strike against its recipe. And another strike may well be the current packaging: It is not a bottle I would feel comfortable placing on a table at a BBQ.

The final strike against Bertman’s? It’s still tough to order online. You can find it, but the official website currently only accepts bulk orders by mail.

Not so long ago, you could only buy Stadium Mustard in bulk, too. Now, however, 12-oz Stadium Mustard squeeze-bottles are $17.20 for six (and by my standards, “six” is not “bulk”).

Unfortunately, there is not a “better” or “worse” best mustard. They’re both wonderful, I’m miserable to say. They taste disturbingly comparable, with only subtle textural differences. If pressed, I’d admit that Bertman’s consistency and complexity have the slightest edge, but I don’t think a layperson would notice.

All the same, I do believe sugar is a toxin — it’s incredibly bad for you! — and on the strength of that opinion alone, I’m tempted to guide you toward the more-readily available Authentic Stadium Mustard.

That said, Bertman’s is a specifically-Cleveland tradition, so perhaps you will be charmed into locating and trying a squeeze-bottle for yourself.

Thanks so, so much to Tim Shrimpton for picking up several bottles of Bertman’s for me at an Ohio supermarket!